SAT Prep Fallacies: You’re Not Taking the Test to Get Better at Anything, So Don’t Try 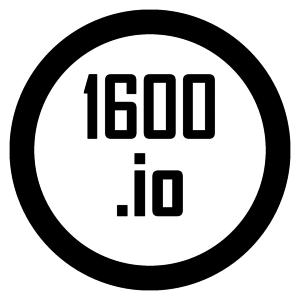 You might hear a tutor make the following argument, which is paraphrased from an actual statement:

“What's your main goal? Many students (and tutors) go astray because they have the wrong answer to this question. Are you taking the SAT because your goal is to become better at reading, writing, or math? No! You don't take tests to become better at something. You take tests to measure what you're already good at. Is anybody really here because they're on a journey of self-improvement? Your real goal is score improvement.”

If you don’t spend a moment or two analyzing this argument, it might seem to make sense, and it’s appealing, because it supports the idea that putting in the work needed to actually get better in the crucial skills tested on the SAT is a pointless waste of time — you should only try to find tricks to get points on the test. 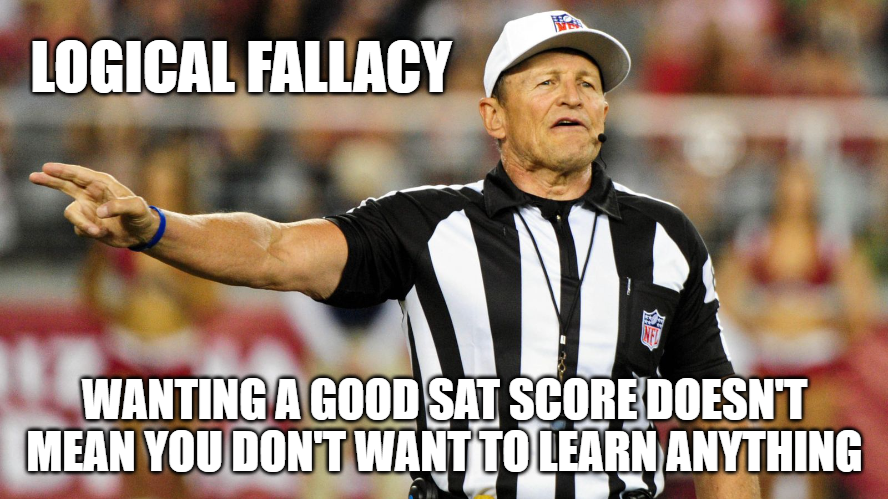 But a closer examination of this argument reveals that it’s logically flawed, and fatally so, because it fails to distinguish between taking the SAT and preparing for the SAT. Of course you don’t take a test to become better at something, but just as logically, you do prepare for a test by becoming better at whatever the test is measuring. The quoted statement above, bizarrely, asserts that somehow, the moment you know you're going to take a future test of any kind, you can't get any better at the subject(s) because your learning suddenly screeches to a halt: "You take tests to measure what you're already good at." That's obviously total nonsense (should you therefore never study for any test?), and it guts the argument completely. The speaker also mockingly insults any student who truly cares about education: "Is anybody really here because they're on a journey of self-improvement?" Isn't it disconcerting for a person whose profession is rooted in education to demean and belittle the very idea of wanting to become better-educated?

Logically, while you’re not taking the SAT with the goal of becoming better at reading, writing, or math, the better you are at those skills, the better your score on the test will be. It follows that it makes perfect sense to engage in activities that result in getting better at those skills as the way to achieve score improvement on the test. And, taking the longer view, you are taking the test because you want to advance your education by going to college, so you should be eager to take the opportunity to improve your skills so you'll be a better-educated person.

“What's your main goal? Many students (and tutors) go astray because they have the wrong answer to this question. Is your goal to become better at the reading, writing, and math skills that the test assesses? Yes! You prepare for any test by becoming better at what the test measures, whether it's the SAT, a test in a class at school, a tryout for a sports team, or an audition. Isn't everybody here because they're on a journey of self-improvement? Your real goal is that self-improvement, which the SAT will dutifully report as score improvement.”

That lays bare the glaring logical flaw in the faulty argument that you shouldn’t try to become better at the skills the SAT tests if you want to improve your SAT score, but there are other very important reasons to use the opportunity the SAT provides to advance your education.

The SAT provides an excellent (and inescapable) assessment of your skills in the tested areas. That means that for most students, it’s a wake-up call about where they are academically in those three foundational realms that are essential for college readiness. Students shouldn’t just want the SAT to report that they have a high degree of readiness for the rigors of college coursework — they should actually want to have a high degree of readiness, so that they are amply prepared for the next level of education. The SAT performs an invaluable service in alerting students to their areas of weakness that will catch up with them at the next stage of their education, allowing students an opportunity to bolster their skills so they're better prepared to tackle college.

If you actually value education, and you want to be as well-educated as possible (which should be why you want to get into the best possible college), think enough of yourself to believe that you can become a better reader, that you can learn and use the essential grammatical and structural skills needed for writing, and that you can understand and deploy the math techniques that represent the baseline for college readiness.

Some people — tutors, parents, your peers — might not think you’re smart enough or industrious enough to be able to learn anything meaningful, so instead of trying to simply get better at the skills assessed by the SAT, you have no choice but to try to figure out how to trick the test into providing a false report about your abilities. This anti-educationalism is alarmingly widespread, and it sends you the clear message that some members of a class of well-educated, intelligent people — professional tutors — have decided that you're just too dumb and unambitious to address the SAT (and, by extension, any test) on its own terms. And, as we have observed, that message is being received and believed by students, who often don't even consider the possibility that they can truly learn the skills assessed by the test, so their entire preparation process is built around acquiring "tips and tricks" but never digging into the skills, concepts, and techniques that are at the heart of the material. Every test question is therefore viewed solely through the lens of trying to match it to some pattern to which a trick can be applied, and students' scores are thus artificially limited because they hit the score ceiling that oblique approach imposes, and this is all because students have been told by people who are "experts" that the students are incapable of true learning and understanding.

We don’t buy it. We think you’re smart enough to learn, and we know you’re hard-working enough to make it happen. We have confidence in your ability to get better, and better, and better, and then you can let the SAT do its job and show colleges that, yes — you’re a great reader, you know good writing from bad, and you can knock that math out of the park because you learned it.

If you view the test solely as a score, and you surrender in the face of being hammered with the message that you can’t be educated so you have to resort to trying to game the test, what will you have after you put down your pencil at the end of the final section? Nothing but a score. But if you realize that the best way to approach the test is as a way to show off how much you can learn, and how good you are, you’ll reap the ample dividends of your educational investment in yourself, in college and beyond. We think that’s the smart path, we know you’re capable of it, and we believe that you’ll make the right choice.